The Concept of Battery Swapping

As electric vehicle sales continue to accelerate around the world, battery charging times and operational lifespan are becoming more important topics in the minds of potential EV drivers. What started with Israeli startup Better Place in 2008 has now become a persistently popular concept in the evolving electric vehicle (EV) markets of the world. Over in China, neither of these concerns (charging time nor lifespan) are an issue as battery swapping grows in popularity. The US startup Ample is trying to follow suit in San Francisco. But will western consumers and car companies play along? What role does Tesla play in it?

The basic idea behind battery swapping is straight-forward: You take your vehicle to a swap station, hand in your discharged battery, get a fully charged replacement and drive off. All within 2 or 3 minutes – It’s even faster than filling up a tank with fossil fuel!

The world’s largest battery swapping network is run by a Taiwanese scooter maker Gogoro, which is now partnering with two of China’s largest motorbike manufacturers: DCJ and Yadea. They’ve agreed to produce bikes and scooters using Gogoro’s interchangeable battery system and drivetrain: You simply park up next to a battery wall, pull out your discharged unit, log into the system, push your old battery in and pull out a fresh one. Most importantly, this allows Gogoro to reduce the purchase price of their scooters and maintain ownership of the batteries. 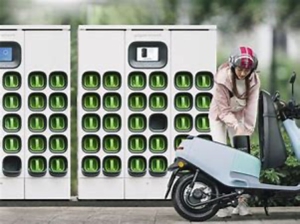 China’s top EV manufacturer NIO is already providing battery swapping services, where EVs make up 10% of all vehicles. Supported by the Chinese national government to improve battery swapping standards they partnered with one of the world’s biggest battery makers CATL, providing battery swapping as a service for the NIO EV Range like NIO ET7, EC6, ES6, and ES8. The concept makes it attractive for customers who sign up with the swap scheme, saving $12,000 off the purchase price of the car and with a $150 monthly subscription for battery service pack including unlimited free swaps plus any battery upgrades. Whenever vehicle battery runs low the driver checks per App to find the nearest battery swapping station, where robots replace the batteries. In March of this year, NIO completed over 2 million battery swaps! One swap process takes about 3 minutes. 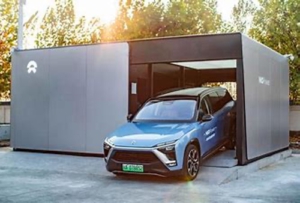 Another example from China is a company called Aulton that has over 300 swap stations and was established in 2016. Aulton has a slightly different business model and shares costs with partner companies like SAIC Motor Corp. and Changan Automobile Co., two other major chinese automakers.

One of the main benefits for battery swapping is that the discharged batteries can then be fully charged at the swap station slowly in order to minimize battery degradation and to expand their lifespan. Here’s a little digression for beginners to explain that matter – if you are already familiar with it, just skip this part: every fast charging reduces battery lifespan!

The problem lies in the battery construction. Batteries are chemical devices where atoms from one electrode are deposited on another. In car batteries, this is lead while most smaller devices today use Li-batteries where Li-atoms do this job. Charging a Li-battery means moving Li-atoms (ions) from one electrode to another. Discharging works in the opposite direction. Quick charging means moving these atoms (ions) over a shorter time span and this leads to problems.

How the battery survives quick charge/discharge depends on its type and size. For example, phone batteries, with their tighter tolerances, are much more sensitive than EV batteries. An “ultra-fast” battery charge would spell disaster for a phone battery.

LION Smart
The European Green Deal and LION Smart’s important contribution for a... 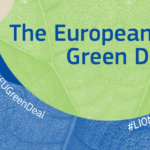 Statement regarding negotiations to acquire technology and production licen...
Scroll to top